Last year, the Ryerson School of Journalism put forward five talented students for the highly-coveted Joan Donaldson CBC News Scholarship, and for the first time in the history of the award, no one from Ryerson was picked.

This year, the school bounced back.

The pair will join CBC News team for 16 weeks. They will have the opportunity to work in several of CBC News platforms and get the chance to work on air or behind the scenes.

Piat-Sauvé and Shahzad were chosen from a field of 33 students across the country. Every year, CBC News selects eight students for the scholarship. They are recommended by their school’s nominations co-ordinator and go through a “long” application process that includes a resumé, cover letter and portfolio, as well as an interview and a well-thought-out critique of a CBC News policy.

The Ryerson School of Journalism interviewed Piat-Sauvé and Shahzad to talk about the application process and their reaction upon hearing about the selection.

Below are interviews and bios of the other scholars. 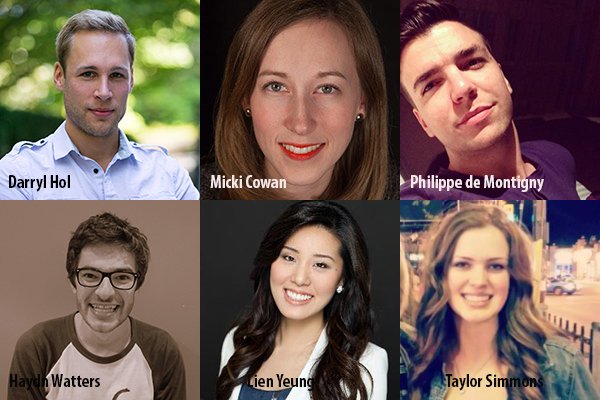 Ryersonian and Eyeopener staff look back on the historic race

The 2015 Ryerson Students’ Union election was arguably the most exciting election in Ryerson history.

The election’s intriguing storylines included: an organized opposition running against the incumbent Unite Ryerson slate for the first time in years, a candidate applauding the death of two New York City police officers, in-depth profiles of the candidates, and accusations that the chief returning officer – the person responsible for managing the elections – was leaning toward one side.

Many students, staff and faculty credit student publications and their detailed coverage for the high engagement by students in this year’s election.

The Ryersonian and the Eyeopener challenged each other to break new stories, ensuring all angles and opinions were thoroughly covered.

The Ryerson School of Journalism caught up with the editors from the Ryersonian and the Eyeopener to reflect on their experiences covering the election and the tight competition between the publications.

With an organized opposition challenging the incumbent Unite Ryerson, The Ryersonian masthead decided to make the election its focus.

“We knew it was coming so we were able to prepare and create a game plan. We got started with candidate profiles of executive positions,” Dhopade said.

“I’ve never written about politics before,” she said. “But I learned that people care about student politics.”

On election night, the Ryersonian had a team dedicated to managing a live blog and posting results as they flooded in.

“We knew this event warranted a live blog. We had hashtags. Even people who weren’t in journalism were following the results on the live blog.”

Every masthead has its “big story.” The previous masthead had published a story on a former Ryerson student who became an ISIS fighter. The piece brought thousands of readers to the website.

The Ryersonian published a story on Jan. 29 that showed Mohamed made a Facebook post applauding the December 2014 killing of two New York City police officers.

“It was a little bit crazy,” Thompson said. the Ryersonian had prepared for many stories before the elections began, but the Mohamed story was a surprise.

“A first-year student, Billy [Johnson], came to us with that story and we just hopped on. It was the most exciting thing that happened for our team,” she said.

Johnson had approached the Eyeopener with the story, but then decided to write it for the Ryersonian, Thompson said.

“The Eye decided not to go with it because we posted it first,” Thompson said.

But she there were stories that the Eyeopener covered that the ’Sonian didn’t pursue, she added.

“We decided that we wouldn’t pursue the story about the CRO, who was basically in bed with Unite Ryerson. We thought that they did good enough coverage of it on their own.”

Thompson and Dhopade say the competition between the Eyeopener and the Ryersonian pushed both publications to write better stories.

“the Eyeopener is really dedicated to reporting campus news, but we’re always competing to get better coverage than the competition, that’s just how the industry works,” Dhopade said.

“We made an effort to have at least one story about the election a week (for print). And it had to be something with a different angle.”

The Eyeopener started covering the election when open calls for nominations were made Jan. 12, Hong said.

Like the ’Sonian, the Eyeopener had a team devoted to covering the campaigns.

The publication did extensive work profiling 23 candidates, from students running for executive seats to those running for director positions.

“The news team was crazy on top of everything,” Hong said.

Hong’s pick for most interesting story during the election was a piece by the Eye that showed a connection between the CRO and Unite Ryerson.

“There were all of these weird connections between [the CRO] and Unite Ryerson,” she added, “The CRO is supposed to manage the campaign, but so many people were saying she was one-sided.”

For Hong, the reason so many students were interested in the election was the introduction of a new slate.

For the first time since 2011, there was a full opposition going against Unite Ryerson. And the opposition wasn’t for just the executive positions; there were candidates competing for lower positions, too.

“Students started to care. For once people wanted something different. They had a choice,” Hong said.

“There was back and forth between candidates and the supporters for each slate.”

Hong said one of the lessons she learned from covering the election was how sketchy politics can be.

The CRO told the Eyeopener it couldn’t take pictures of the ballot boxes, Hong said. It wasn’t an election bylaw, she said, but because the CRO said she had the authority to.

“It blew my mind that a CRO could think they have that kind of power,” Hong said.

The Eyeopener also reported that there were open ballot boxes in plain view inside the RSU office.

There was a historic turnout for voters in this year’s election. Unite Ryerson was removed from executive position for the first time in nine years.

Thousands of student hit the polls. It is reported that roughly 3,623 students voted for the president’s position, an almost 75-per-cent improvement from last year.

On election night, the entire Eyeopener masthead visited the Ram in the Rye to check on results, Hong said.

The Eyeopener also ran a live blog that garnered thousands of followers.

The Eyeopener reported that the hashtag #RSUElections, was the third-highest-trending hashtag in Canada.

“Sometimes students can care. Judging from [my] first year when nobody gave a crap to now, with almost an overthrow of power, this election was the most exciting one in recent years,” Hong said.

Previous Next
Close
Test Caption
Test Description goes like this